All You Need To Know About Reasoning Test

The one thing that makes humans far superior to other beings is the ability to reason and think logically.

Reasoning is the capability of the brain to take inputs from all the 5 senses and actually make sense out of it!

We as humans use logic in fairly everything we do in our day to day life.

But, why is reasoning so important in the corporate world?

What’s all the buzz around the logical reasoning test for pre-employment?

Why do employers put so much time and effort testing candidates for this particular skill?

If these are some of the questions that are haunting you, you have come to the right place!

Well, as an employee in any organization, you will face numerous situations where you need to brainstorm ideas and make important decisions. That’s exactly where logic comes into the picture!

Basically, companies want to make sure that you will be able to make the right decisions even when under pressure before they hire you for that precious role you have been eyeing!

Even though the basic idea and logic behind every part remain the same, the test is divided into different parts to test specific skills which might be required for special job roles.

The diagrammatic logical reasoning test also called inductive reasoning or abstract reasoning is the most common form of the test.

The type of questions in this test assess your problem-solving skills and are generally used to test candidates for roles which require high problem-solving ability like the finance sector.

Diagrammatic tests also assess a person’s decision-making skills and ability to think critically which are essential traits to perform under high-pressure situations. They also test how an applicant works with unfamiliar information.

The questions in this type of tests require you to interpret data, identify patterns and spot the odd ones out or predict the next set of images.

Commonly, they have a series of pictures. The aim of such questions is to measure your ability to reason logically.

This test is closely co-related to IQ tests

From the employer’s point of view, such tests are necessary to determine a person’s general intellect, irrespective of the educational and cultural background.

Lateral thinking is very essential to solving such questions.

Here are a couple of examples of the type of questions under this category. 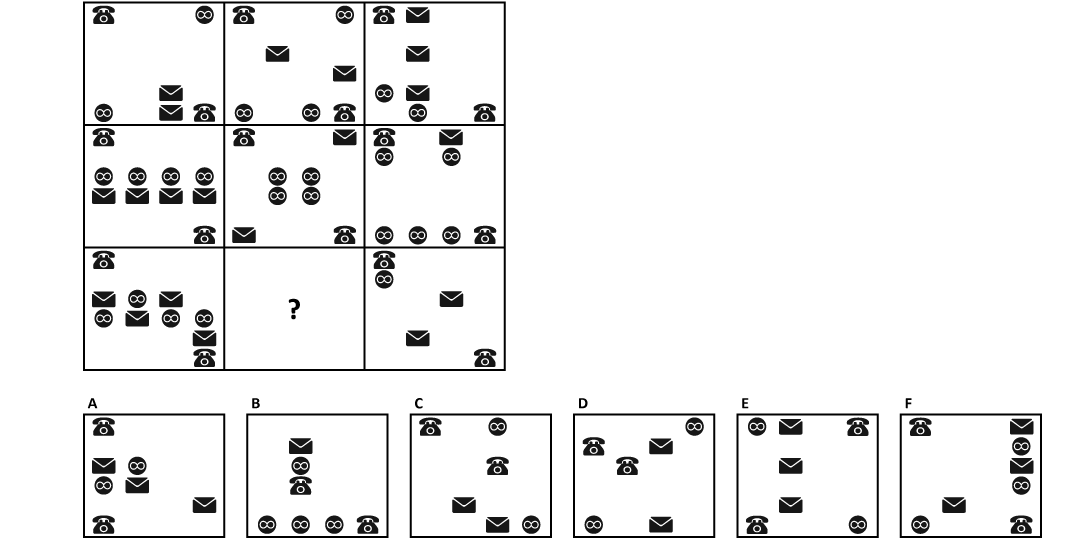 This test calculates a person’s ability to draw conclusions from a certain situation to arrive at the right answer.

This skill is necessary to measure a person’s quick acting skills when there is a lot information to process and come to a conclusion which seems to be the best possible answer. But it doesn’t mean he has to “jump” to conclude.

The candidate will be tested to see if he can differentiate fact from inference which is a very common scenario in real life.

The most common questions in this type of test include reading a passage and answering questions related to it. A few examples of questions from this test are

Psychotherapists recognize that the law is generally in place to uphold client-therapist confidentiality. However, there are situations that may occur where the therapist is under obligation to break that confidence. This obligation can vary depending upon where the therapist is practising and it may occur as a result of their employment contract or of the law. Where such an issue does occur, the therapist is expected to firstly try and discuss the presenting issue with the client; however, in situations where the factors under consideration are particularly urgent, it is accepted that this cannot always be the case.

Legitimate braches of confidentiality relate to circumstances where the information the client has shared relates to acts of terrorism; information of this nature must be reported. There are other circumstances where breaching confidentiality may be considered legitimate, for example, in the case of serious crime or suspected child abuse. Individual employers and independent therapists have their own boundaries but must agree with this contractually with their client at the outset of the therapeutic relationship.

5. If a therapist breaches confidentiality about a serious issue without first informing their client of their intentions, they are breaking the law.

Numerical reasoning test is the core of psychometric assessments.

These tests include graphs, text, tables and number sequences.

You can solve these questions easily if you have paid attention in your maths classes back in high school!

The questions under these sections require you to process numerical information, apply certain operations on the data to arrive at the solution.

Most employers want to make sure that you have basic numerical and problem-solving skills and will be able to crunch up a decent amount of numbers. This is crucial for any kind of business.

Some of the common topics in numerical reasoning questions are

Some example questions in this section are listed below. You can check where you stand in your numerical skills by trying to solve them!

What was the total value of Grade A and C Wireless Headphones produced in 2019?

What was the proportionate value of grade A to C grade wireless headphone produced in 2018?

These tests are very similar to verbal tests where the test taker needs to draw conclusions from the given information and not his own knowledge.

The major difference in the type of question is that verbal tests have a paragraph to read and answer questions from but deductive tests have 2 statements from which you need to conclusions. Deductive tests often use syllogisms of the general form

and the famous Sudoku puzzle is the perfect example of a deductive test. These tests need you to think analytically.

Deductive arguments are checked for their validity and soundness.

It is safe to say that a majority of the math problems we solve are based on deductions. We try to arrive at the solution by deducing or simply put simplifying the problems based on some general guidelines.

Employers use deductive reasoning test to check a candidate’s ability to process the given information.

“In the hypothetico-deductive scheme, the inferences we draw from a hypothesis are, in a sense, its logical output. If they are true, the hypothesis need not be altered, but correction is obligatory if they are false.” – Peter Medawar

If the first two statements are true, the third statement is

Having good reasoning skills not only makes you stand out of the crowd during recruitments but will also help make better decisions in your everyday life.

P.s The questions in the article are just examples for reference for each section and the answers are not provided for the same! For more questions and also the solutions for them, you can head to Evalground.

Reasoning is an integral part of many of the tests provided by Evalground, such as Aptitude test, psychometric test and many more test which you can take up as a part of pre-employment assessments.