5 Myths About Millennials That Need To Go 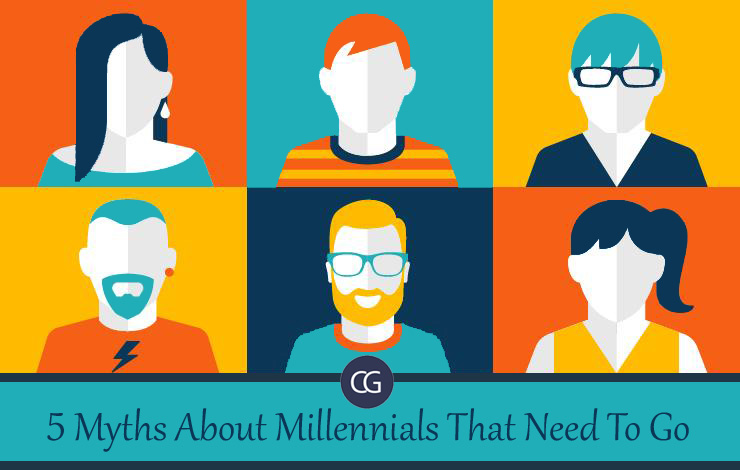 Millennials are the latest phenomenon in today’s world. Their influence in global markets and even in the workplace is undeniable. This digitally native generation has surpassed even Generation X to become the largest demographic cohort to exist. Millennials have been raised in a socially networked world, and being the most diverse they have been considered to be the most open-minded and dynamic generation to exist. Born with natural confidence, millennials are optimistic, proactive people who have blurred the lines between work and play.

However, for a while now, millennials have garnered sort of a bad reputation. They have been deemed as entitled oversharers who are extremely self-centred. But what we should understand is that, as more and more millennials are reaching their employable age, they are coming into the labour market with new perspectives and are challenging the existing framework of relationships between employers and employees. This means that they want to shape the place at which they work and are keen on making an impact. So millennials are really not entirely bad at all. Here are a few common myths about millennials that we’re going to bust for you.

Myth 1: A Millennial’s goals and expectations differ from those of previous generations

It should be welcome news to millennial misanthropes, that this is a very false notion. The fact of the matter is, millennials aren’t that far away from the Baby Boomers and Generation X.  A study by IBM Institute for Business Value found that the behaviours and preferences of Millennials, Baby Boomers and Generation X were quite similar. Millennials believe in work values such as performance-based promotions, well-articulated strategies, financial security and leadership that inspires them to be better at their workplace. These values are the same even for older generations, so tweaking your company culture to make it more millennial-friendly really shouldn’t be that hard since it will be accepted even by the older generations.  In fact, Millennials are likely to be less keen about tackling environmental or social challenges but more likely to initiate meaningful change in the workplace.

Myth 2: Millennials change jobs like they change their clothes

Although the above statement may not be entirely false the truth is millennials stick to their jobs longer than their previous generation counterparts, at the same age. This could be due to the lesser flexibility of the labour market or longer job tenure. Either way, millennials are more likely to stay in the current jobs for about three to six years. A study performed by Guy Berger, an economist at LinkedIn states that millennials change their jobs about four times within a  decade of coming out of college, as opposed to only two changes in the case of Generation X. However Berger says that the phenomenon of job hopping is an old one and millennials have just now hopped on the wagon. It’s not as if job hopping did not exist before the millennials started doing it. Furthermore, it is that stage of their lives when job-hopping is common. A millennial need not hop if he has found the job that he loves.

Myth 3: Slacking is second nature to them

Living in a digital world, older generations seem to think that millennials can have anything they want with just an arm’s reach. Be it googling something they don’t know or using their gadgets for quick and easy services, millennials have taken everything for granted. How can they possibly understand the principle of hard work and discipline, right? Wrong! A consulting agency, CEB found that the millennials comprising their workforce were highly competitive, even more so than previous generations. Also, most millennials had the tendency of comparing their work with other colleagues, in order to push themselves further.

Millennials also juggle between several jobs at once and more than 40% of the workforce is soon to become part-time based. Millennials know the value of hard work in an ever-changing job environment where different skills and knowledge is of the essence.  43% of those who take on multiple jobs are actually millennials. So really, do you need more proof?

Millennials have amassed a dubious reputation for advocating the participation prize. What people are failing to see is that millennials, very much like others, believe in equality and performance-based acclaim. When asked what distinguished a good boss from a great one, most millennials answered with traits such as ethical,  fair and transparent. In fact, most Gen Xers believe that all members of a successful team need to be rewarded. Also, millennials aren’t looking for trophies or medals for a job well done. What really makes millennials happy is if they truly feel that their efforts have contributed to the company. Giving them responsibility, helps them develop a passion and a purpose for their work, and they’ll never let you down. This is the real prize that they seek.

Millennials have received flak for always oversharing and not knowing the boundaries of privacy. Be it asking for career advice on Facebook or sharing the most private details of their lives, millennials are deemed as addicts of social media who are officially desensitized to the world.

Let’s debunk that myth for you. Millennials are more inclined towards personal contact rather than digital when it comes to learning new skills. Furthermore, millennials are the ones who create a firm distinction between their professional and private lives. Gen X and baby boomers are less likely. Just because they were born in an age of Twitter and Pinterest ( which they do use widely of course) doesn’t mean millennials prefer virtual communication. Meetings that are scheduled and instantaneous conferences are really the ways in which millennials would like to engage with people at their workplace.

This is one of the most common and also one of the least truthful myths about millennials. There is a notion that millennials are a lazy, impatient generation which is a result of their addiction to mobile phones and social media. But, this is purely a myth as millennials are one of the most hardworking people. They might have their own way of working and yes they might be addicted to social media and their phones, but they sure know how to use that addiction for their advantage. This is the age of youtube sensations and social media influencers. These are the millennials who prove that being addicted to social media is not all that bad. As they say, ‘Everything has it’s own pros and cons’.

Myth 7: Millennials are not loyal

On the contrary, millennials are more loyal to their employers than boomers and Gen X as per studies. This generation is more focused than ever on what they love and are less likely to switch career paths often. Millennials are people who put their best foot forward to work on what they love so give them the right career and they will stick to it!

While every generation comes with its strength and weaknesses, it is good to look past the surface value that the cohort seems to portray. And whether you like it or not, millennials are able and ready to take over the world and make a mark during their reign. So recruiters, prepare accordingly because millennials have a fresh and dynamic perspective that you can add to your talent pipeline.